To assist those researching the history of bus services in the Chesterfield area, we are gradually adding links to scans of timetables for services that operated in North Derbyshire and the Peak District.

The links below are to examples of timetables and maps produced after 1981 – please click on the picture of the cover to see the publication.

For a selection of bus company timetables produced prior to 1981, please click here.

In the early 80’s, Derbyshire County Council started publishing its three comprehensive timetable books – North East Derbyshire, South Derbyshire and Peak District. This resulted in most of the local bus companies ceasing to produce their own timetable books for Derbyshire bus services, preferring instead to sell the new DCC books and in some cases, producing individual service leaflets instead (often using pages from the new books).

The timetables below are examples of those produced since 1981 and we will be gradually adding more during the coming months, including some for the period immediately prior to the deregulation of bus services in 1986. Please note that some of these PDF files are very large and so to keep the keep the size of them down, indexes, adverts, conditions of carriage and timetables of services outside the Chesterfield / Peak District may not have been scanned. 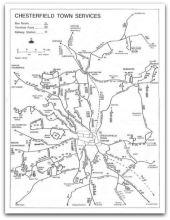 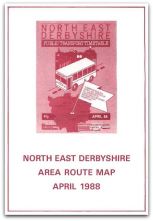 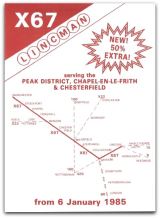